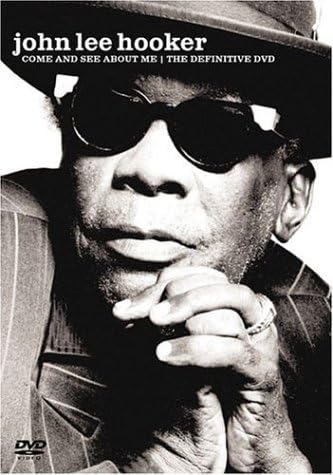 The back cover promises "complete archival performances of [John Lee Hooker's] most popular songs," all courtesy of the Hooker estate. That's good news for anyone used to music programs containing only frustratingly brief clips of their subjects at work, and it's exactly what Come and See About Me delivers--in spades--in this superb, two-hour compilation featuring the late bluesman in live performance by himself, with various bands, and in collaborations with a host of famous partners. Hooker's blues was a dark, menacing, sexy sound, and some of the best moments here come when he is playing solo, with only his guitar, his stomping foot, and what guitarist Ry Cooder (who joins him for "Hobo Blues") calls his "deep, well-like" voice accompanying songs like "It Serves Me Right to Suffer" (from 1969) and "Bad Like Jesse James" (1986). But the collaborations are swell too, including those with Van Morrison, Cooder, Bonnie Raitt, John Hammond, and the Rolling Stones ("Boogie Chillen'" comes from the Stones' Steel Wheels tour, with Eric Clapton on hand as well); there's even an appearance with Brit blues rockers Foghat from 1978, with the great Paul Butterfield adding harmonica. The bonus features (a couple of interviews, discography, another "Boogie Chillen'" take) aren't much, but little matter--for blues fans, this is the motherlode. --Sam Graham

The journey began in Clarksdale, Mississippi in 1917. When it finally ended in 2001, a 6 decade long boogie tornado had left a path of one of the most influential marks on the music world. The deep voice, the distorted guitar, and that foot that tapped away like an out of control metronome brought him out of Mississippi to the far reaches of this country. Included among the vintage footage are performances of Hooker jamming with the Rolling Stones, Eric Clapton, Van Morrison, Ry Cooder, and Bonnie Raitt. Also included are archive performances throughout his storied career from many of the various television appearances he made as well as vintage interview clips with Hooker. Bonus features include a discography, a bonus interview clip with John Lee, an interview with Zakiya Hooker (his daughter), and a bonus clip of John Lee Hooker and Roy Rogers performing "Boogie Chillin'". This film is presented by the John Lee Hooker Estate.